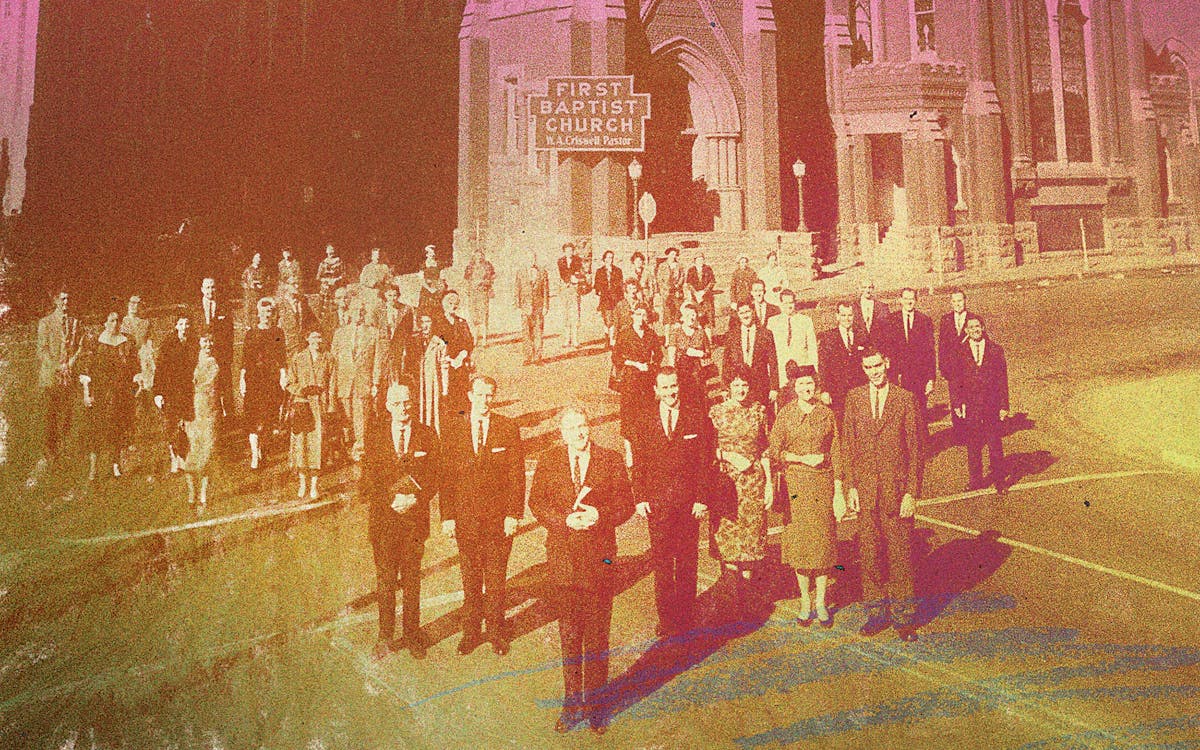 This article is part of Texas Monthly’s special fiftieth-anniversary issue. Read about the other icons that have defined Texas since 1973.

There was no Protestant church in America more renowned fifty years ago than First Baptist Church. God-fearing Southern Baptists from around the country took their summer vacations in Dallas just to attend Sunday services in the historic sanctuary, which was built in 1890. They stared, awestruck, at the towering stained-glass windows, the burnished pews, the thick red carpet, and the choir dressed in red robes, and they gasped when the church’s granite-jawed pastor, W. A. Criswell, often wearing an all-white suit, strode up to the pulpit, accompanied by great musical fanfare.

Criswell was a gifted orator, quoting long passages of Shakespeare (and, of course, the Bible) from memory. His voice was so loud that he never needed a microphone. After 50 years in the pulpit, he retired in 1994, and the church went into a decline as deacons struggled to find the right man (never a woman) to fill his white shoes. Finally, in 2007, the job was offered to Robert Jeffress, then the 51-year-old pastor of a Baptist church in Wichita Falls.

Jeffress, who grew up in the north Dallas suburb of Richardson, had spent his childhood attending First Baptist. “I studied every sentence of Dr. Criswell’s sermons, and I read all of his books,” Jeffress told me. “When I was fifteen, God called me to become a pastor, and I remember going to see Dr. Criswell to tell him what God was leading me to do. And he said, ‘Well, Robert, I want you to spend your summers learning every part of this church. I want you to work in the children’s area, the mission area, the music program . . . because one day, I believe, it will all be yours.’ He knelt down with me and prayed that God would prepare me to become the pastor of First Baptist Church.”

Jeffress was hardly a Criswell clone. He wore dark suits, and he delivered his sermons about the wages of sin in a calm, plainspoken voice, always holding a Bible in his right hand. But he didn’t hesitate to stir things up. The day he arrived, he began working to restore the church to its former glory, embarking on a $135 million building program to turn First Baptist into “a spiritual oasis in the heart of downtown Dallas.”

Today, First Baptist boasts 16,000 members. Sunday worship services, which feature a full orchestra and a 100-member choir, are held in a high-tech, three-thousand-seat sanctuary. On the plaza in front of the church, a giant fountain shoots jets of water as majestic hymns play over loudspeakers. The complex includes educational buildings, three parking garages, and a glass skywalk. All that’s left from the original church is the historic sanctuary, which is still used for weddings. Although First Baptist isn’t as large as some megachurches, Jeffress’s radio show broadcasts Monday through Friday on 1,100 stations, and his televised Sunday services are watched by more than three million viewers a week. His thirty-first book, What Every Christian Should Know, was just published.

Jeffress is especially well-known for his appearances on Fox News, where he stoutly defends Donald Trump, who even attended a Sunday service, in December 2021. Jeffress introduced him as “a great friend of Christians everywhere.” The audience gave Trump a standing ovation.

In November, Jeffress told me that he “enthusiastically” supported Trump’s current run for the presidency—but after Republicans began backing away from Trump in the wake of the midterm elections, he announced that he wouldn’t endorse anyone until after the Republican primaries. In any case, he insisted he would never tell his members whom they should vote for. “All I ask is that they vote based on their biblical values,” he said.

According to Jeffress, First Baptist is continuing to draw new members—more than eight hundred in the past year alone. He and the church deacons are talking about eventually adding new buildings to accommodate the church’s growing flock. “We have a lot of souls to convert to Christ,” Jeffress said, “and we are not going to slow down. We’re never going to slow down.”

This article originally appeared in the February 2023 issue of Texas Monthly with the headline “First Baptist, Born Again.” Subscribe today.