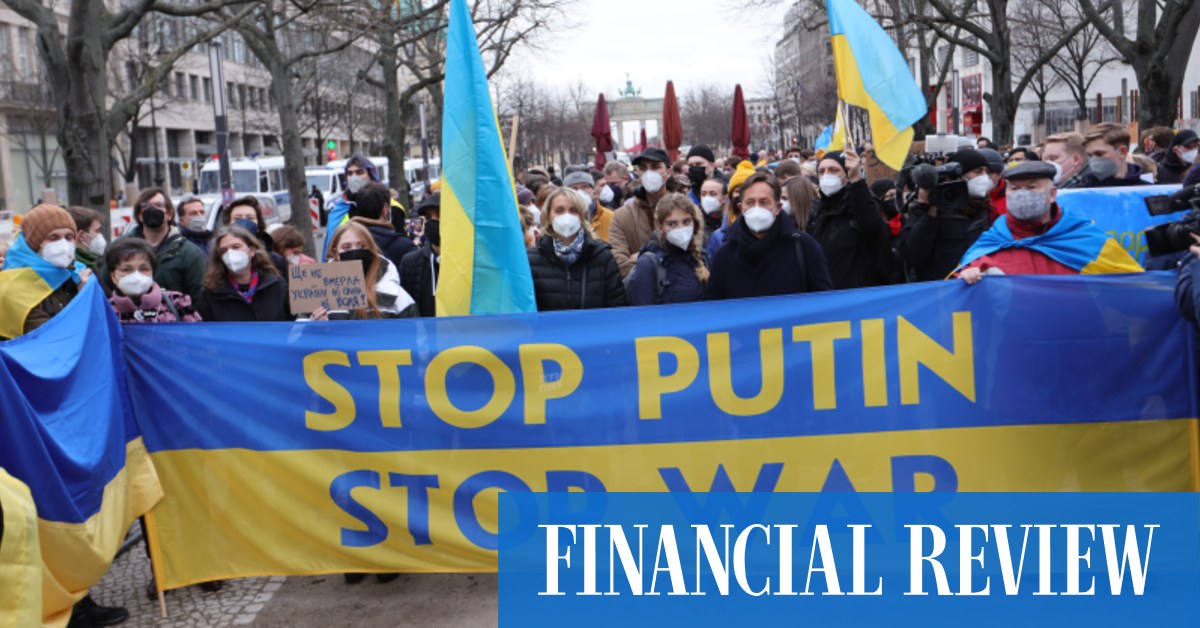 “We’re living in a more fragmented world that includes financial fragility, so one thing that is clearly on everyone’s mind is: Where to invest, and how to invest, in a more multipolar world,” said Karen Harris, New York-based managing director of the Macro Trends Group at consulting firm Bain & Co, before flying out to Davos.

Energy is at the heart of the economic war that’s pitting the US and allies against Russia. Both sides have sought to weaponise it, and there’s potential for further turmoil in 2023.

President Vladimir Putin says Russia won’t sell oil to any nation participating in price caps that the US and its G7 allies are trying to impose. For now, that means a $US60 per barrel limit. The G7 rules have helped push Russian crude exports well below that threshold – potentially squeezing Putin’s ability to finance the war.

But it’s not all about crude oil. Similar curbs on refined Russian products such as diesel are due to kick in next month, and some Western officials worry that they could trigger shortages.

And the shutdown of Russian natural gas pipelines has left a big hole in global supply. So far, a warm European winter has helped make the shortfall less acute, and bring gas and power prices down.

Semiconductors, crucial components of everything from electric cars to ballistic missiles and new artificial intelligence technologies, are emerging as one of the global economy’s most important battlegrounds.

Over the past year, the Biden administration has wielded various tools, including export controls, to prevent China from buying or manufacturing the most advanced chips. It’s also launched a $US52 billion ($74.5 billion) subsidy program for the domestic chip industry, to bring manufacturing capabilities back home.

The US says its blunt-force restrictions are aimed at Chinese military capabilities, while Beijing says they’re part of a wider effort to halt China’s economic advance. Whatever the case, American allies will need to be on board for the curbs to work. The Netherlands and Japan, which host some of the most advanced chip firms, have already agreed.

US and European leaders, meanwhile, fear the next front in the new cold war – which could turn hot – will be Taiwan.

China has claimed Taiwan as its own since the ousted nationalist government in Beijing fled there after the communist revolution. The Pentagon said recently it sees no sign of an imminent attack. However, it expects more of the aggressive behaviour that’s become a pattern since former House Speaker Nancy Pelosi triggered a furious reaction from Beijing by visiting the island in August, with an increase in military drills and intrusive actions by air and sea.

On top of the obvious risks of a direct conflict between superpowers, there’s an economic dimension to the standoff. As home to the world’s largest chipmaker, TSMC, Taiwan is critical to all kinds of global supply chains. Even an escalation short of war, like a Chinese blockade, could set off a colossal domino effect.

The Biden administration is spending more than $US50 billion to boost chipmakers at home, and also backing the electric-vehicle industry as part of a $US437 billion plan to fight climate change.

Europe reacted furiously, accusing its ally of unfair trade practices that encourage companies to relocate to the US, and says it may roll out financial supports of its own.

The risk is a global subsidies race where the winners are the countries with the deepest pockets, and the losers are economies in the developing world already suffering from growing debt burdens.

More and more countries – not all of them American adversaries – are seeking ways to conduct more business outside of the dollar, because they see the US turning its currency into a tool for advancing foreign-policy objectives.

Among countries like China, Russia and Iran – as well as India and the Gulf energy giants, which have more amicable relations with Washington – the search is on for ways to build trade links that eschew the dollar. Chinese President Xi Jinping’s visit to Saudi Arabia last month, which saw talk of energy deals priced in China’s currency with investment set to flow the other way, may be a sign of things to come.