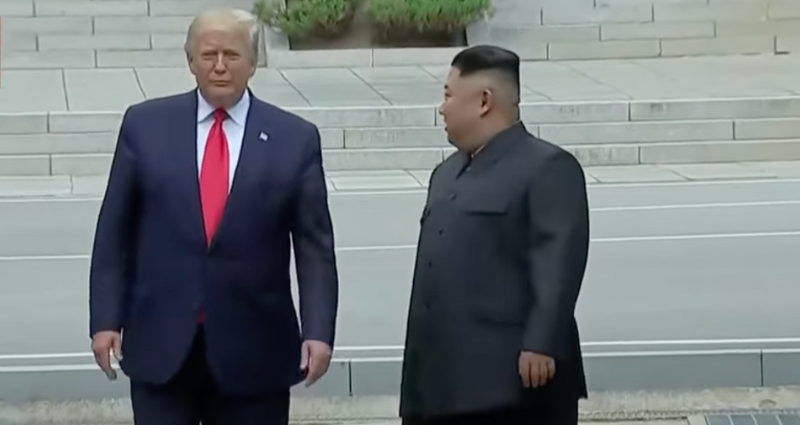 According to an upcoming addition to Michael Schmidt’s 2020 book “Donald Trump v. The United States,” former President Donald Trump considered using a nuclear weapon on North Korea in 2017 and blaming it on another country.

In his book, the Washington correspondent for The New York Times uses “secret FBI and White House documents and confidential sources inside federal law enforcement and the West Wing” to take an extensive dive into the Trump presidency.

Schmidt notably writes about the life and tenure of John Kelly, who served as the first secretary of Homeland Security in the Trump administration from January 2017 to July 2017, as well as White House chief of staff from July 2017 to January 2019.

A little over a week after Kelly became chief of staff, Trump declared that North Korea and Kim Jong-un — whom he dubbed “Rocket Man” — would be “met with fire and fury and frankly power, the likes of which this world has never seen before.”

However, more than Trump’s public remarks via Twitter, Kelly expressed concern with Trump’s private conversations, according to Schmidt’s new afterword.

What scared Kelly even more than the tweets was the fact that behind closed doors in the Oval Office, Trump continued to talk as if he wanted to go to war. He cavalierly discussed the idea of using a nuclear weapon against North Korea, saying that if he took such an action, the administration could blame someone else for it to absolve itself of responsibility.

Although Kelly allegedly attempted to use logical reasoning to dissuade the then-president — citing difficulties in avoiding blame, lives lost in the case of war, economic repercussions and consequences of nuclear conflict — Trump’s attention would inevitably “turn back to the possibility of war, including at one point raising to Kelly the possibility of launching a preemptive military attack against North Korea.”

More from NextShark: Chinese American acting legend Anna May Wong to be featured on new US quarters for 2022

The possibility of a widespread massacre had “no impact on Trump,” wrote Schmidt.

Aligning with his alleged private conversations, Trump went on to tweet in Jan. 2018 that Kim “just stated that the ‘Nuclear Button is on his desk at all times.'”

“Will someone from his depleted and food starved regime please inform him that I too have a Nuclear Button, but it is a much bigger & more powerful one than his, and my Button works!” Trump continued.

Trump allegedly talked openly about targeting North Korea “on unclassified phones” and “with friends and confidants outside the government,” which would require Kelly to “remind Trump that he could not share classified information with his friends.”

With Kelly and other military leaders identifying the growing threat of nuclear conflict, the chief of staff allegedly appealed to Trump’s “narcissism” in an attempt to encourage a diplomatic relationship with Kim. Kelly told Trump that he could show he was the “greatest salesman in the world” by forming this type of relationship, Schmidt revealed.

Trump and Kim would eventually meet a total of three times during the former’s presidency: in June 2018 in Singapore, in Feb. 2019 in Hanoi and in June 2019 at the Korean Demilitarized Zone.

Schmidt’s “Donald Trump v. the United States,” which was initially published in Sept. 2020, will be available in paperback with the new afterword on Tuesday.