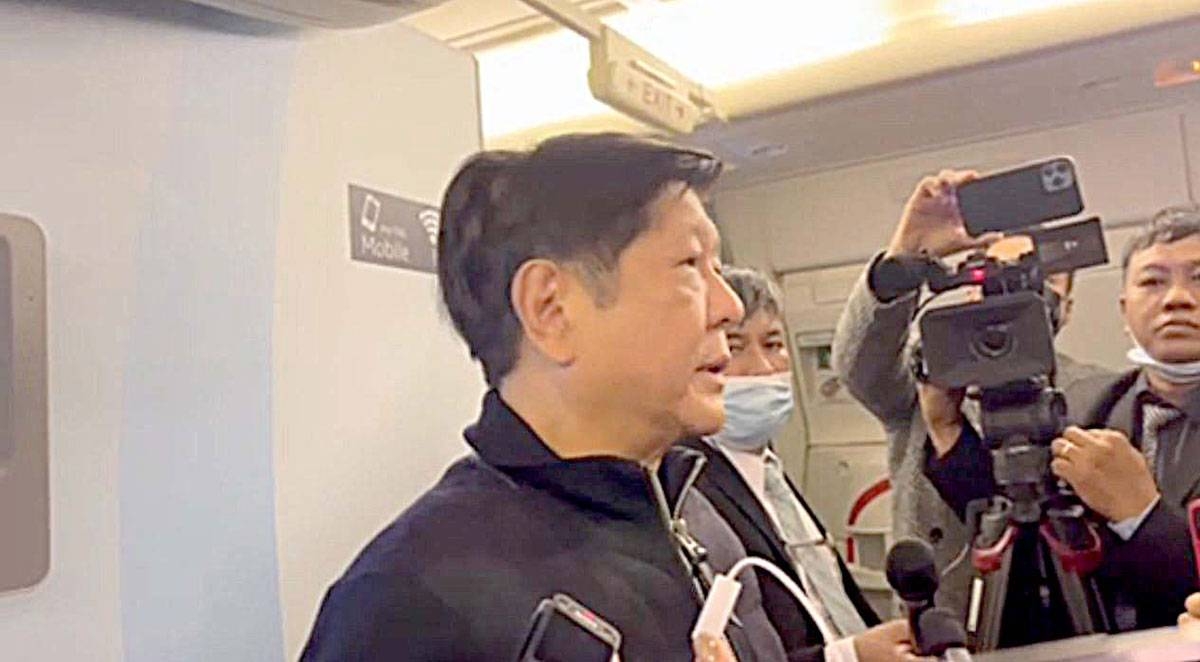 (UPDATE) ABOARD THE PHILIPPINE PRESIDENTIAL PLANE: President Ferdinand “Bongbong” Marcos Jr. will tell the world the Philippines “is forming a sovereign wealth fund for big investments” when he joins global leaders and top chief executive officers at the World Economic Forum (WEF) in Davos, Switzerland, this week.

Speaking to reporters accompanying him to Switzerland, Marcos said he will pitch the Philippines as an “investment destination” during the forum.

He said he is looking at attracting big investments in agriculture, energy, digitalization and climate change through the proposed Maharlika Wealth Fund or MWF.

The proposal faced some pushback, with critics questioning the need for a sovereign wealth fund, given the government’s budget deficit and record debt.

Marcos said the Davos forum will “give us a better opportunity to expand and expound on the things that we are doing in the Philippines.”

Get the latest news

delivered to your inbox
Sign up for The Manila Times’ daily newsletters
By signing up with an email address, I acknowledge that I have read and agree to the Terms of Service and Privacy Policy.

The President said he is also eyeing “best deals” from other businessmen on the sidelines of the forum.

While in Switzerland, Marcos will also meet with business leaders and members of the Filipino community.

During a public briefing Monday, economist Michael Batu said Marcos’ participation in the forum is the “best opportunity” to pick the minds of his fellow leaders and gain feedback.

It will also help fine-tune the proposed measure for the MWF, Batu said.

House Bill 6608 or the “Maharlika Investment Fund Act,” was approved on third and final reading by the House of Representatives on December 15.

It was transmitted to the Senate four days later.

Batu said the forum will also serve as a good follow-up to the meetings Marcos had with European Union officials and business leaders in Brussels, Belgium late last year.

The President also told the reporters he is confident the country’s inflation “will come down” for the rest of the year as his administration steps up efforts to stabilize prices and the supply of agricultural commodities.

The President said the government was forced to import to address the rising prices of agricultural products.

Marcos said the government also did the same thing to increase the supply of sugar, but “we did it a slightly different way.”

Asked if he had plans to appoint a full-time Agriculture secretary, Marcos said, “When this is fixed, when we have the systems in place, yes, yes.”

He said the government is also working hard to solve the “rampant” smuggling in the country.

Speaker Martin Romualdez on Monday said he is confident that the President can articulate the administration’s gains, introduce the MWF and promote the Philippines as an investment hub at the World Economic Forum.

“In his previous participation in various global fora, President Marcos has displayed an excellent ability to articulate the interests of the Philippines as well as the significant gains achieved under his administration and the country’s direction for future growth,” Romualdez said.

“I’m confident he would do the same in the WEF, particularly in introducing the Maharlika Wealth Fund to the global stage and in helping our local business leaders explore investment opportunities for the Philippines,” he said.

Romualdez is part of Marcos’s official delegation to the WEF.

“The proposed sovereign wealth fund will help President Ferdinand Marcos Jr. keep the country on the high-growth path. We want to assure the public that the management of the fund will follow best practices and the principles of transparency and accountability,” he said.