Caught up in that broad downtrend was cybersecurity company CrowdStrike (CRWD 1.58%). Its stock ended 2022 down a whopping 49%. Like many of the companies that experienced outsized stock price appreciation during the earlier bull run, it was hit particularly hard in the sell-off.

While some of that 49% decline was surely tied to overall market sentiment, CrowdStrike also faces some near-term headwinds that certainly factored in. But the business’s long-term growth potential makes it a compelling stock to look into for 2023.

Macro headwinds may have spooked investors

When CrowdStrike reported its fiscal 2023 third-quarter results in late November, the headline numbers were impressive. For the period, which ended Oct. 31, revenue grew 53% year over year, and the company achieved quarterly records for both cash flow from operations ($243 million) and free cash flow ($174 million).

However, macroeconomic trends slowed its growth somewhat, and recognition of that may have factored into the stock’s sell-off. For example, while CrowdStrike’s annual recurring revenue continued to increase each quarter, its 54% year-over-year increase in Q3 continued a pattern of slowing growth.

To be clear, 54% growth in annual recurring revenue is still very impressive. But a prolonged trend of deceleration is bound to impact a company with the type of high valuation that CrowdStrike reached prior to last year’s share price plunge.

Management made clear on the Q3 earnings call that while the company is experiencing challenges due to the macro environment, it believes that new deals are being delayed, not lost. For example, the average amount of days it takes CrowdStrike to close a deal increased by 11% as customers are taking longer to review their decisions and requiring more approvals before signing on with CrowdStrike.

So why is CrowdStrike a no-brainer buy?

While it may be true that its revenue growth will continue to slow in the near term, the guidance issued by the company still implies strong growth. For its fiscal 2024, CrowdStrike expects a slow start to the year in terms of net new annual recurring revenue, and for the second half of the year to be approximately flat compared to fiscal 2023. Even that forecast, however, implies a 30% increase in annual recurring revenue. That’s still strong growth.

CrowdStrike has historically done a great job keeping its customers and getting them to increase their spending on its services over time. Its dollar-based net retention rate of 124% means that, on average, its current customers are spending 24% more with it than they did a year ago. Additionally, such a large share of its customers have adopted four or more of its modules, the company stopped reporting that metric. As of Q3, 60% of customers used five or more modules, 36% used six or more, and 21% used seven or more.

Despite these impressive user spending numbers, CrowdStrike is experiencing slight deceleration in these metrics as well. To combat this, the company is investing in expanding its pipeline of new customers. A new leader in the marketing department is realigning marketing spend and focusing on driving brand awareness to attract new customers.

This strategy should allow CrowdStrike to bring in new customers even when times are tough with the hope that they’ll spend more as economic conditions improve. This strategy could be a powerful growth driver if it’s successful.

Cheaper, but not cheap

Thanks to its history of strong business performance, CrowdStrike stock has never been cheap. However, its valuation right now is rather compelling. 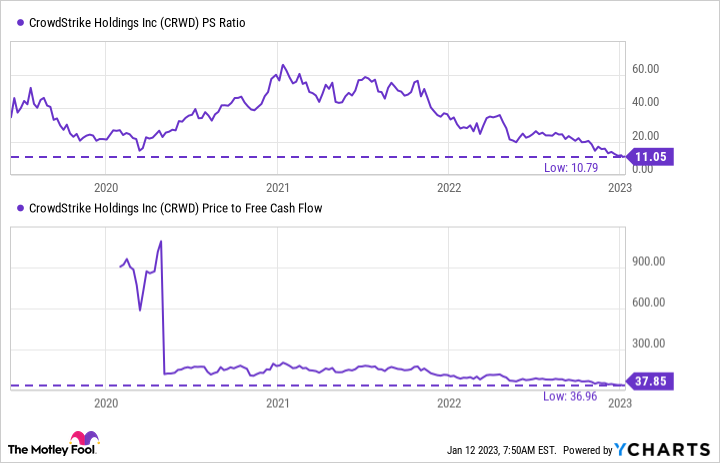 Not only have CrowdStrike’s price-to-sales and price-to-free-cash-flow multiples been on a steady decline for the past year, they’re both near all-time lows. This year may still be challenging for CrowdStrike, but there are ample reasons to believe that the long-term outlook for the company is still strong.

It’s possible the stock will fall further from here, but its current valuation is pricing in more pessimism than I feel is warranted relative to the long-term outlook for the company. In my view, CrowdStrike is a no-brainer buy for 2023.