Digital Realty Trust (DLR -1.19%) is one of the world’s leading providers of data-center services and it has seen its share price battered by a confluence of factors. One is the market flight from technology stocks in general, another is concern that some of its major clients would build out their own centers, becoming competitors instead of customers.

But those fears are far from fruition. This large real estate investment trust (REIT) has posted record bookings for three of the past four quarters while continuing to expand a global presence that now features more than 300 data centers serving about 4,000 customers in roughly 50 cities on four continents. It opened its fourth center in Greece just last month.

Large data centers like those owned and operated by Digital Realty are critical nodes in the internet, and the Austin, Texas-based company’s growth tracks the digital revolution. In fact, since going public at $12 a share in 2004, Digital Realty has more than quadrupled the S&P 500 in total return, as you can see here: 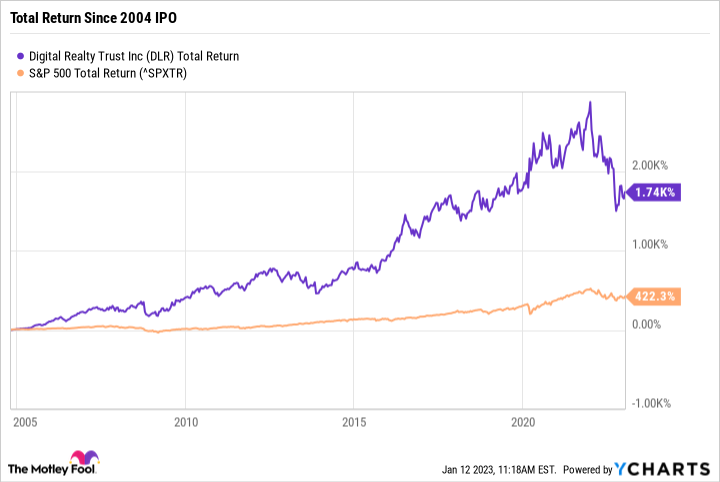 But, as this next chart shows, the past year has not been so kind to Digital Realty: 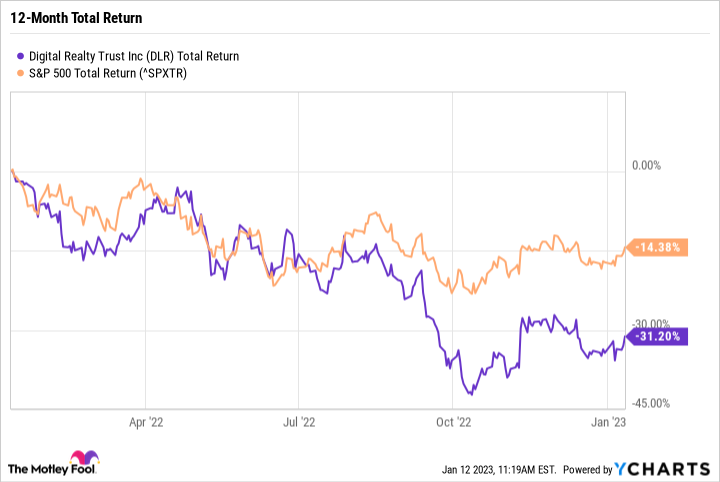 That share price slump has helped drive the dividend yield up to about 4.6%, levels last seen about 10 years ago. But what also really drives up the yield is 18 straight years of dividend increases, and over time the payout has grown by 400%, including by an annualized average of 4.15% over the past three years.

Yes, I believe that Digital Realty is a buy. First of all, the company’s carrier- and cloud-neutral data centers provide ever-more critical co-location and interconnection solutions for thousands of customers. There’s also a very high barrier to entry for even the largest enterprises considering establishing data centers on their own.

Second of all, the stock is cheap, trading at a price-to-funds from operations (FFO) ratio of about 10, and at a price level not seen since 2017. As the chart below shows, FFO (a key metric for REITs) has been growing during the past decade, even during the current beat down. This growth points to Digital Realty’s ability to not only sustain but raise the dividend. 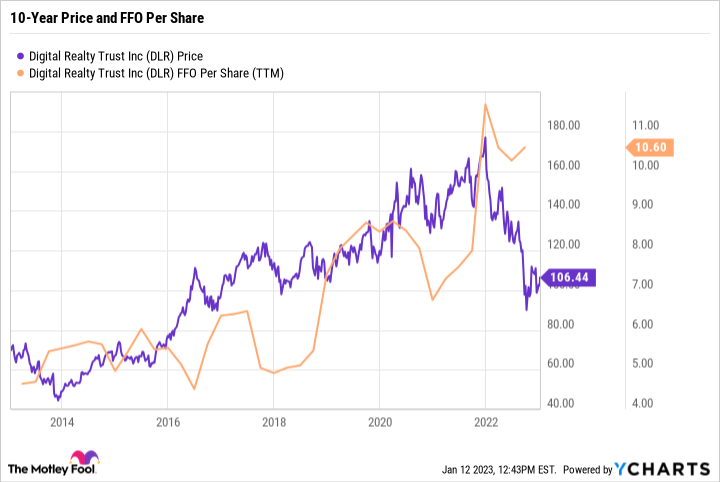 There are REITs that yield more, certainly. But there are not many that can match a long-term performance that has turned a $10,000 investment made at the dawn of the Great Recession in 2008 into a cool $55,400 now.

The reason I brought up the “R” word is because plenty of forecasters say we’re heading into one now. Real estate stocks are often considered a potential shelter from that storm, as are companies that provide essential services.

Digital Realty carries both those labels and it’s a stock I own now and am confident about going forward. In fact, I plan to add to my stake, given its favorable price levels of late. There’s a lot of potential upside there as a source of growing passive income and share price alike.