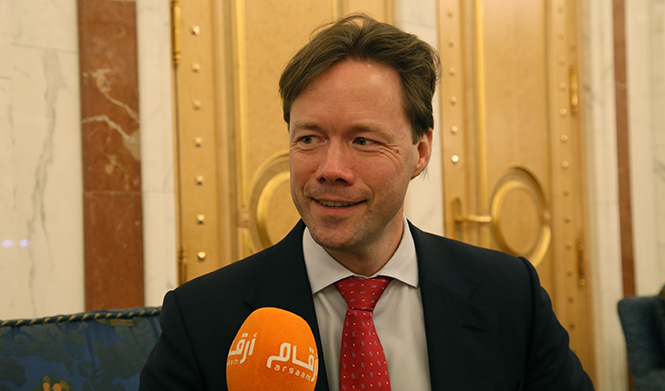 The Eurasian Resources Group (ERG) is planning to pump up to $50 million investments in Saudi Arabia this year, CEO Benedikt Sobotka told Argaam on the sidelines of the Future Minerals Forum.

ERG’s operations in the Kingdom are self-financed, but the group is keen on talks with local commercial banks, he added.

ERG has launched Saudi operations for two years. It has offices in Riyadh and Jeddah and is always keen to attract new members.

Moreover, it applied for exploration licenses in the Arabian Shield region, driven by its enthusiasm for the Saudi mining sector, which has its great investment potentials.

ERG was among the first applicants for exploration licenses in the Kingdom last year. It received support from the Ministry of Industry and Mineral Resources, Sobotka added.

The Saudi government and the industry ministry offered professional treatment for investors to draw experience and resources to develop a new mining industry.

ERG ranks among the world’s biggest cobalt and copper producers, key materials used in the production of batteries and renewable energy sources.

Sobotka noted that financial resources can back the mining industry in Saudi Arabia, as the investment of $1 in the sector means that $10 are invested in roads, electricity connections, water pipes, schools, and hospitals, since they are often located in remote areas.

He added the mining sector contributes to creating many job opportunities, not only in mines, but also in downstream processing.

Further, Sobotka explained that environment protection is very important in the Kingdom, being applied according to high standards by the ministry. As a global company, ERG applies global environmental standards in Saudi Arabia as in any other country.

The group is assessing new regions in the Kingdom to apply for exploration licenses through local partnerships, the CEO added, pointing to ERG’s memorandum of understanding with Saudi Arabian Mining Co. (Maaden).

Maaden has a strong track record and a highly professional management team. So, it is very normal to join hands with Maaden, especially during the company’s transformation stage.