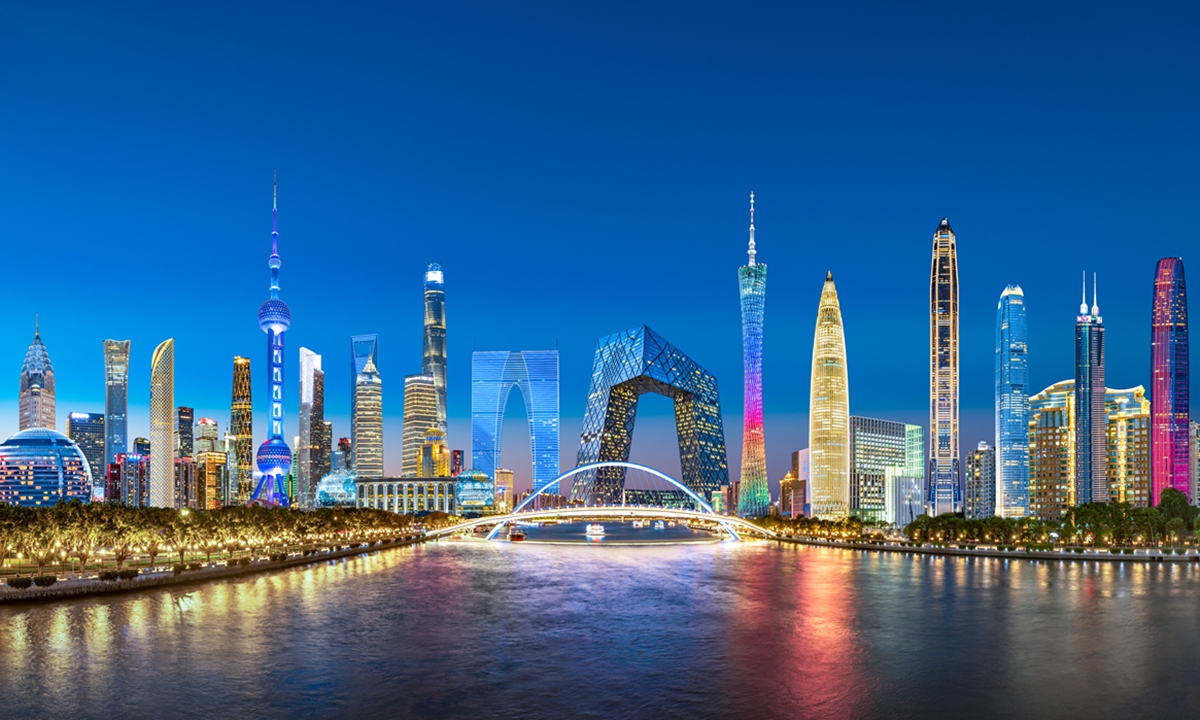 An illustration of landmark buildings in China Photo: VCG

In recent interviews with the Global Times, a number of economists expressed their confidence in a rapid recovery across the Chinese economy in the first months of 2023, pinning their hope on the world’s second-largest economy to lead a global economic recovery out of the shadows of the COVID-19 pandemic.

Economic expectations are high after China downgraded COVID-19 management, reopened its borders and once again has become the major topic linked to global economic growth for 2023. Banks are raising their forecasts for China’s 2023 GDP growth and expecting a stronger and faster rebound.

Chinese Vice Premier Liu He is also set to travel to Davos, Switzerland for the World Economic Forum’s annual meeting, the first time a top Chinese leader has travelled to the meeting since the pandemic began, according to the Ministry of Foreign Affairs.

China’s economic growth is likely to roar back quickly in the first few months in 2023 with GDP likely to rebound to more than 5 percent, as policymakers pledge to step up support for the COVID-ravaged economy, according to forecasts of economists polled by the Global Times.

Economists expect the world’s second-largest economy to pick up in the first months of 2023, underpinned by constantly optimized epidemic prevention policies.

We will see a V-shaped recovery in the next few months to the pre-pandemic level, Xing Zhaopeng, Senior China Strategist with ANZ Research, told the Global Times in a recent interview.

“China’s GDP in 2023 is forecasted to be 5.4 percent.  Low base and quick normalization from infections will be two major helping hands,” Xing said.

Factoring the optimized COVID-19 response, China will likely hit a viral peak and bottom out in economic terms in the first quarter of 2023, Wu Jinduo, head of fixed income at the research institute of Great Wall Securities, told the Global Times.

That suggests the country is well-placed to pass “a stress test in the wake of the epidemic,” as the economy is on track toward a post-COVID-19 recovery, according to Wu.

Throughout this year, China’s GDP growth is estimated to be around 5 percent, in part due to a low base, she predicted.

Cong Yi, a professor at the Tianjin University of Finance and Economics, said economy indicators are likely to show signs of recovery by February and March.

“We may see clear signs of recovery by the second quarter. This year’s GDP is forecast to grow by more than 5 and 5.2 by optimistic forecast,” Cong told the Global Times.

Boosting consumption is a key task for China’s economy this year, economists said.

In 2023, China needs to continue to focus on expanding domestic demand and it is very important to do a good job in promoting consumption and give play to its basic role, Yao Jingyuan, special researcher of the Counselors’ Office of the State Council, told the Global Times.

“Our biggest development advantage is that we have the world’s largest domestic market, which is the most fundamental foundation for China’s economic development,” Yao said.

In a latest move, more than 20 provinces and municipalities including Shanghai, South China’s Guangdong, East China’s Zhejiang and Shandong provinces, have announced their GDP growth targets for 2023 as of Friday. Among them, South China’s Hainan Province sets the target for around 9.5 percent, the highest, according to thepaper.cn.

Among the key tasks for 2023, expanding domestic demand and promoting consumption, is the priority. Shanghai has made it a priority to restore and expand consumption and build itself into an international consumption center. North China’s Hebei stressed the need to increase support for the catering, accommodation and retail sectors. Southwest China’s Sichuan Province is determined to speed up its efforts to build itself into a world renowned tourist destination.

Although the economic recovery is yet to reach a firm footing, the economy’s strong resilience and vast potential, adding to the country’s huge domestic market, still suffice for an overall upturn in the economic operations over 2023, reckoned Wu.

Wu Chaoming, deputy head of the Chasing Research Institute, echoed that there will be stronger consumption recovery.

“It is predicted that per capita consumer spending will grow by 8 to 12 percent in 2023, and consumption will rebound significantly in 2023 compared with 2022,” he said.

Put in perspective: In the US, growth is forecast to fall to 0.5 percent in 2023 – 1.9 percentage points below previous forecasts and the weakest performance outside of official recessions since 1970, according to World Bank’s latest Global Economic Prospects report.

Hence, the gap between China and the US in GDP terms would widen in 2023, Wu Jinduo said, expecting China to be one of the top growth engines for the global economy in 2023.

Looking ahead to 2023, with the global economy in the shadow of a deep recession, China is likely to be the world’s most critical macroeconomic stabilizer, thanks to the stability of China’s macroeconomic policy and its commitment to deepening reform and opening up, Chen Jia, an independent researcher on global strategy, told the Global Times.

Recently, a number of western banks and financial institutions have upgraded their forecast for economic growth in China.

Morgan Stanley in December raised its forecast for China’s gross domestic product in 2023 to 5.4 percent from its previous outlook of 5 percent, expecting stronger and earlier rebound.