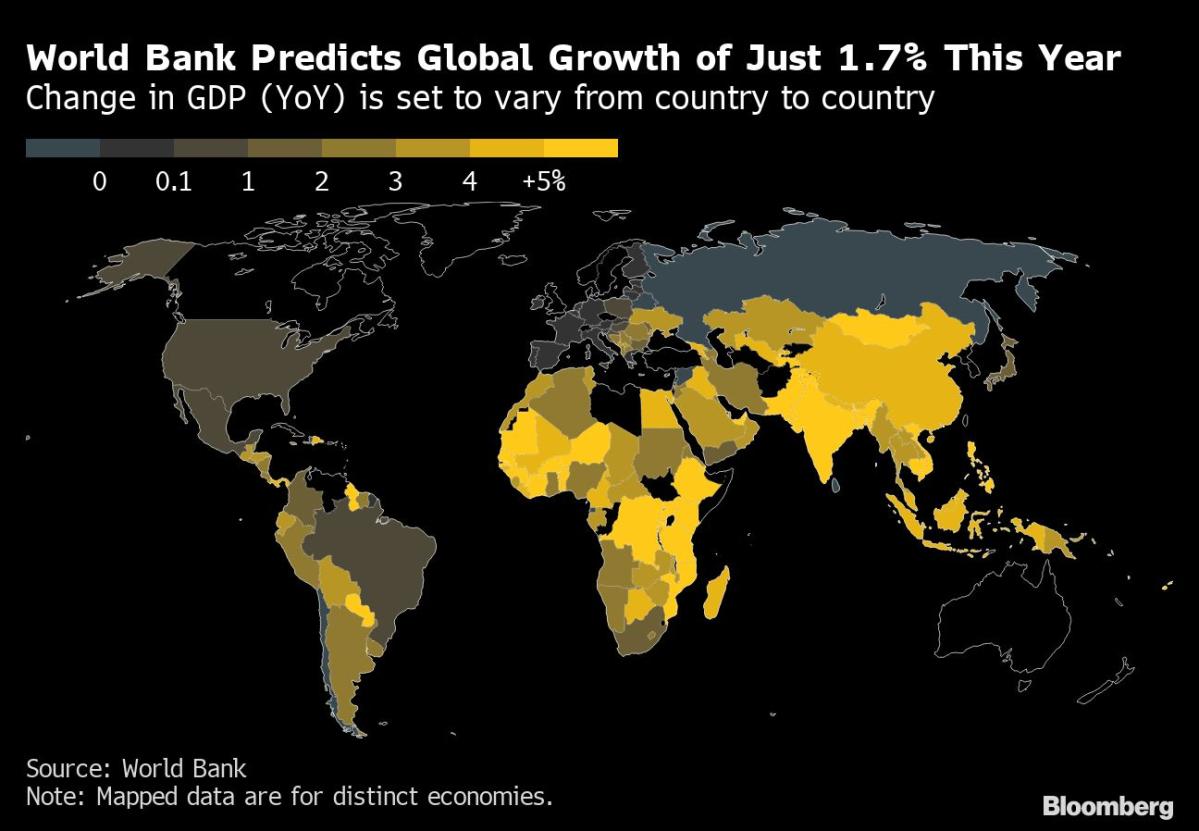 (Bloomberg) — The world economy is beginning the new year on a more optimistic note, though that’s no guarantee 2023 will end that way.

A variety of factors – a sooner-than-expected reopening of China’s economy, a warmer-than-normal winter in energy-strapped Europe and a sustained fall in US inflation – are combining to dissipate some of the gloom that engulfed financial markets at the end of 2022 and fanning hopes the world can dodge a recession.

Data released Friday showed the UK economy unexpectedly growing in November and Germany also avoiding contraction at the end of 2022.

But with the Federal Reserve, European Central Bank and several peers still pushing ahead with higher interest rates, the risk of a slump later in the year can’t be dismissed, especially if inflation proves sticky and doesn’t retreat as much as central banks want.

“There’s a narrow path to a soft landing,” Goldman Sachs Group Inc. chief economist Jan Hatzius told a Jan. 11 webinar sponsored by the Atlantic Council. “It’s going to be difficult for policymakers to calibrate the amount of restraint to get that done.”

He’s betting they’ll succeed — and so too are investors. Emerging-market equities are on a tear and corporate-bond prices are rising on hopes that the world economy will emerge from the scariest inflation in decades without suffering a downturn.

There are some reasons for guarded optimism. Price pressures are easing worldwide, in part because global growth has slowed but also due to an untangling of supply chains that were tied in knots by the pandemic and Russia’s invasion of Ukraine. US consumer prices rose 6.5% in December from a year earlier, down from a high of 9.1% in June.

The ebbing of inflation will support the purchasing power of consumers who spent much of the last year squeezed by rising prices, especially for such essentials as energy, food and rents. It will also allow central banks to scale back their rate increases, dampening fears among investors that policymakers would go too far and “break something” in the markets.

Fed Chair Jerome Powell and his colleagues are expected to downshift to a quarter-percentage-point rate hike at their Jan. 31-Feb. 1 policy meeting, according to trading in the federal funds futures market. That would follow a half-point increase in December and four 75 basis-point moves prior to that.

The step back has led to a reversal of the dollar’s meteoric rise, easing pressure on other central banks to match the Fed with economy-slowing rate increases of their own.

When prices for energy, especially natural gas, surged last year, a recession in Europe was widely seen as a foregone conclusion. No longer: Goldman’s Hatzius said he now sees the region dodging a downturn.

Credit mild winter weather and a concerted effort to boost supplies and expand suppliers to make up for lost imports from Russia. The result: the euro-area economy has held up better than expected: Industrial production in Germany edged up in November, despite the country’s heavy dependence on Russian energy supplies.

“The danger of a complete economic meltdown, a core meltdown of European industry, has — as far as we can see — been averted,” German Economy Minister Robert Habeck said earlier this month.

Germany should also benefit from China abandoning its Covid Zero policy in favor of a reopening of its economy, a major destination for the European country’s exports.

Wall Street economists are busily upgrading their forecasts for China’s growth following the dismantling of Covid Zero. Barclays Plc lifted its gross domestic product growth projection to 4.8% for 2023 from 3.8% on a faster-than-expected reopening. Morgan Stanley now expects growth of 5.7% instead of an earlier estimate of 4.4%.

While China’s recovery faces hurdles, the combination of an easing real estate slump and more government support means the outlook is better than many anticipated as recently as the end of last year.

“We’re now expecting a kind of V-shaped recovery as we’ve seen in many other economies that have been shut down because of Covid,” said Goldman’s Hatzius of China’s prospects.

The China reopening, though, could complicate the global inflation story, by stoking demand — and prices — for oil and other commodities. That could then have implications for the Fed and other major central banks.

Hopes that the Fed can rein in elevated inflation without crashing the economy into recession were boosted by the December jobs report, which showed wage gains easing while unemployment returned to a multi-decade low.

Despite such budding optimism, the World Bank this week slashed its growth forecasts for most countries and regions, and warned new shocks could still lead to a recession.

While the risk of a near-term global recession has diminished, there’s still a 70% chance of a slump later this year or in 2024, according to JPMorgan Chase & Co. chief economist Bruce Kasman. Price and cost pressures are likely to remain too persistent and elevated for the Fed and the ECB, setting the stage for an eventual end to the global expansion, he said.

“A recession is the more likely scenario down the road,” Kasman said.