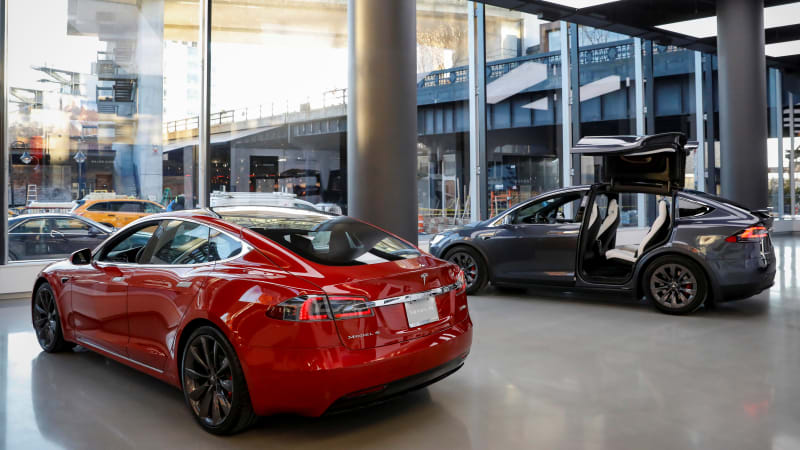 Wall Street is revisiting the key question when it comes to figuring out how much Tesla is really worth: Is it a stodgy automaker or a high-growth technology company?

It’s a reasonable debate considering the challenges Tesla faces. And even after the brutal selloff in the stock over the past year, Elon Musk’s company still has a bigger market valuation than Ford Motor Co., General Motors Co. and Toyota Motor Corp. — combined. Now, analysts and investors are starting to doubt that this premium is justified.

“There is growing debate among institutional investors on how to value Tesla — auto or tech? In our view, the answer lies with growth,” Wells Fargo analyst Colin Langan wrote in a note on Friday. “We are concerned that growth appears to have moderated in China and the US, likely explaining the recent price cuts.”

Tesla shares sank as much as 6.4% to $115.66 in New York on Friday after the company slashed prices on its lineup in the US and Europe. Still, the stock is trading at 24 times its forward 12-month earnings estimates, not far from the average 21 multiple for the technology-heavy Nasdaq 100 Index. Meanwhile, GM is at 5.8 times estimates, and Ford is at 6.6 times.

Concerns that demand for the company’s electric cars may be taking a hit surfaced after Tesla’s third-quarter deliveries fell short of expectations. But investors’ angst intensified amid a barrage of headlines in late December and earlier this month, including a temporary production halt in China, news of heavy discounting in the US and most importantly, the fourth-quarter deliveries that also disappointed.

The prospect of a recession in the US also doesn’t help. Consumers, squeezed by persistently high inflation, rising interest rates and now the uncertain economic times, are expected to hold back on big-ticket purchases, such as cars. EVs, typically more expensive than gas-driven ones, are set to see demand weaken at least in the short term.

Analysts’ average estimates now reflect an expectation for Tesla’s revenue to grow 33% in 2023, which while significant is still below Tesla’s own long-term outlook of 50% expansion. In comparison, GM’s revenue is expected to rise 2.6% this year, and Ford’s 1.6%.

Once that aggressive growth also came with strong margins. But the latest price cuts show that is fast becoming a thing of the past.

“Overall, heading into a challenging backdrop in FY23, we believe Tesla had to decide whether to sacrifice volume growth or gross margins, and based on pricing actions, the answer appears to be gross margins,” Guggenheim analyst Ronald Jewsikow wrote in a note Friday, while downgrading his recommendation on the stock to sell from buy.