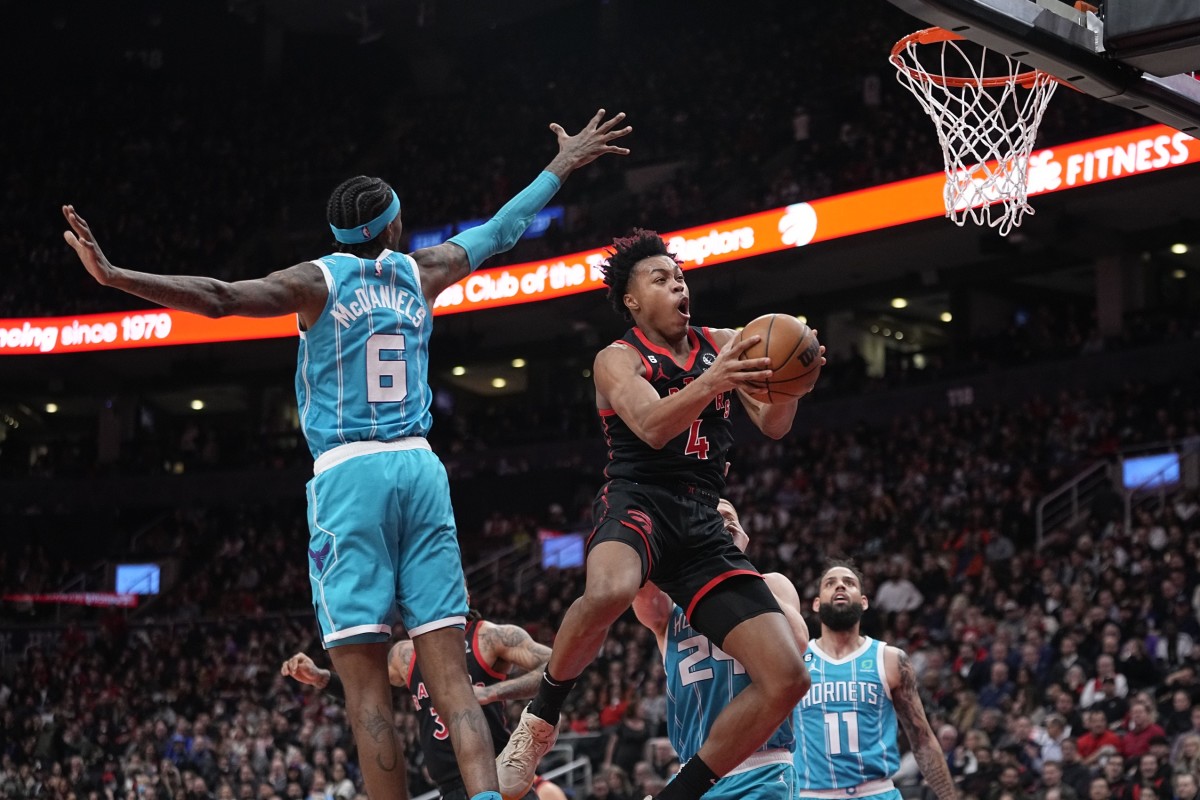 For the better part of the first half of the season the Toronto Raptors’ offense looked something like this: Give the ball to the best player on the court, usually Pascal Siakam, and get out of the way.

With so many players constantly in and out of the lineup it made some sense for Toronto to resort to the basics of isolation basketball. There was barely any time to start scheming up complex offensive ideas before an injury would pop up and force the Raptors back the drawing board.

Lately, though, there’s been some continuity within the lineup, and it’s allowed Toronto and Raptors coach Nick Nurse to get a little innovative. His decision: lean into pick-and-roll basketball a little more and move Scottie Barnes to the center spot as the roller in Toronto’s unorthodox like-sized lineup.

The change has opened up Barnes’ offense a little more. There’s less dancing around on the perimeter trying to make decisions and more decisiveness for Barnes who has averaged 16.5 points, six assists, and just one turnover per game since the start of the new year. He’s forced to catch the ball close to the basket and either use his speed and quickness to beat slower defenders or make the next pass, often to a three-pointer ready for a catch-and-shoot opportunity.

“I’m primarily trying to focus on just trying to get the ball side to side,” Barnes said Thursday. “It looks way better if you watch the game. I feel like we had more assists as well. So when we get the ball moving, get the ball popping, it’s hard to guard.”

The sample size with Barnes as the roller still remains small for the Raptors, just 33 total possessions so far, but the numbers have been impressive. He’s averaging 1.42 points per possession as the roller, per NBA tracking data, putting him in the 85th percentile in the league for efficiency.

“He just looks sharp. Sharp and focused and professional,” Fred VanVleet said Friday. “He’s adjusted and accepted playing the screen and roll game a little bit as a screener. He’s guarded well at the five spot. So he’s playing well on both ends of the floor.”

VanVleet has been one of the biggest beneficiaries of Barnes’ positional change. Of his eight assists Thursday night against Charlotte, six came via Barnes buckets, four directly after pick-and-roll plays by Barnes. It’s turned Toronto’s lead guard into more of a playmaker, allowing him to facilitate the offense without the offensive shooting burden that’s plagued him for so much of the year.

“Me and him are developing more in that [two-man game],” VanVleet added. “It just depends on what the defence is gonna do and how they’re gonna play it but obviously screen and roll is an easy part of basketball that helps your offense and we’ve been able to get some of that over the last week or so.”

Nurse admitted part of the change has to do with who Toronto has played lately. Indiana, Milwaukee, New York, and Portland all have bigs who prefer to drop in the paint and a pick-and-roll attack with a player like Barnes puts their centers in compromising positions. The increased effectiveness has also been buoyed by three straight victories over the Trail Blazers and Charlotte Hornets, two teams in the bottom third of the league in defense.

As long as Toronto stays relatively healthy, some form of pick-and-roll basketball should help the Raptors’ inconsistent half-court attack tread water. It’s likely not the long-term solution for Barnes, the 6-foot-9 forward who envisions himself as more of a guard than a traditional big. But for now, it’s working and at 19-23, that’s all the Raptors can afford to think about.

Raptors show what may be to come, opening season’s 2nd half with victory over Hornets

Gary Trent Jr. is showing the Raptors his value as a Reliable and Professional Scorer