Last month was another tough one for the stock market … even the blue chips. The Dow Jones Industrial Average (^DJI) lost a little more than 4% of its value in December, bringing a budding rebound effort to a screeching halt. It remains to be seen if the rally since then has legs.

And it was even worse for some of the Dow’s constituent stocks. Several of its components fell by double-digit percentages last month, in fact, driving a handful of these tickers to new 52-week lows in the process.

Veteran investors of course know such sell-offs can be buying opportunities. The question is, are the biggest of the Dow’s December losers worth stepping into now?

For the record, the steepest losses suffered by Dow stocks last month were dished out by Intel (INTC -0.59%), Apple (AAPL 1.01%), and Salesforce (CRM -0.06%). Apple and Intel each fell a little more than 12% in December, while Salesforce ended the month with a setback of more than 17%. 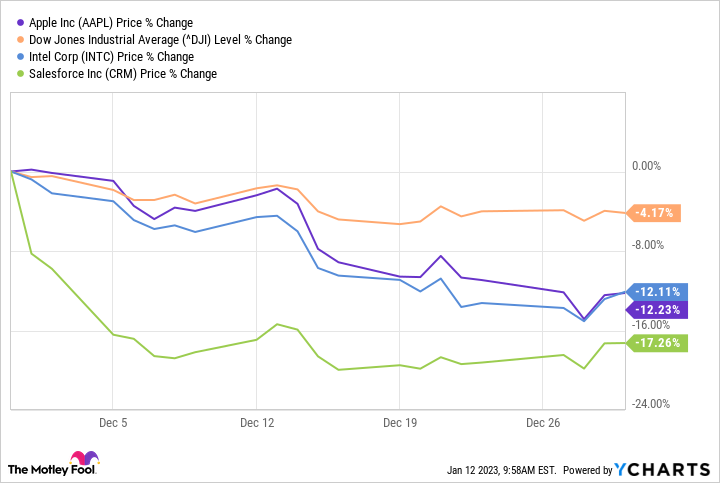 Intel’s stumble isn’t rooted in a specific cause. Indeed, the company made some encouraging announcements last month. Not only is it splitting up its graphics processing operating arm to better focus on its opportunities in that arena, but the company also introduced new software that extracts more computing power for its institutional hardware customers. It’s just that none of this news was bigger than Intel’s broader, perceived problems: competition and brewing economic weakness.

Apple’s uncharacteristic pullback stems from early December reports that holiday demand for its iPhone was tepid, followed by news that the company was struggling to procure them anyway. Neither headline is something Apple’s shareholders are accustomed to seeing. Just bear in mind the stock’s weakness for the better part of 2022 may have made these investors sensitive to such red flags.

As for Salesforce, chalk its loss up to so-so guidance for the quarter now underway, and the resignation of co-CEO Bret Taylor. Although the company is in good hands with Marc Benioff at the helm, Taylor’s abrupt exit at the same time Salesforce announced expectations for top-line growth of only between 8% and 10% for the quarter ending this month was more than investors could bear. Ditto for the several analysts who downgraded and/or lowered their price targets for the stock last month.

Look five years down the road, not five days

The question remains, however: Are any or all of these Dow stocks worthy buys following last month’s lousy results? The official, “most-correct” answer is no.

While it’s certainly better to purchase a quality stock while it’s down rather than up, there’s nothing about a calendar month’s results that makes it a better (or worse) time to step into a new name. Stocks hit major highs and lows in all days and all months, and it’s entirely possible all three of these names have more value left to lose before making a bottom.

The unofficial, “don’t overthink this” answer, however, is yes — all three of these stocks are arguably closer to a major low than not; you could certainly find less compelling entry points.

Take Salesforce as an example. Although Taylor’s impending exit sends a warning of sorts, it shouldn’t. Benioff has been the company’s figurehead for years, in the spotlight, answering the tough questions. Very little will change in terms of effective leadership.

The company is also adapting to what looks like an economic headwind, announcing earlier this month it would be laying off about 10% of its workers in the near future. Rather than seeing the glass as half-empty, investors celebrated the cost-cutting measure, sending the stock well up from last month’s new 52-week low. It’s a sign that the market may be shopping for any reason to start stepping back in again after Salesforce shares’ 58% pullback from their late-2021 high.

Intel shares are starting to test the bullish waters as well, up 15% from December’s low. That may be because the company unveiled the 13th Gen Intel Core Mobile Processor — now the world’s fastest mobile CPU — at this year’s CES (held early this month). It’s also starting to turn heads with its recently released 4th Gen Xeon Processors aimed at the server and data center market, which were also unveiled at this year’s CES. While Intel sells hardware to the consumer market, institutions are big business for the company too.

Newcomers can buy the stock at only around 10 times its past and projected per-share profits. That’s not bad, even with Intel’s long-standing design and foundry challenges.

And Apple? It’s the biggest and most profitable company in the world for good reason. The stock, however, is down more than 20% since August for the wrong reason. That’s the erroneous, generalized worry that Apple can’t thrive in a lousy economic environment.

Let’s be clear. These stocks aren’t attractive additions to your portfolio simply because they lost a lot of ground in a short period of time. Lots of stocks suffer setbacks of this scope, but fully deserve to do so.

In this instance, though, all three of these stocks represent companies with staying power that’s not being factored in. And, the fact that December’s pullbacks are only part of much bigger pullbacks bolsters the long-term bullish thesis. That thesis remains intact even if these three stocks end up moving a little lower before moving meaningfully higher again. For perspective, Apple and Salesforce shares are presently priced below their consensus price targets, while Intel is trading right at its target price.

In other words, don’t be penny-wise and pound-foolish here, and don’t get too hung up on the short-term noise.