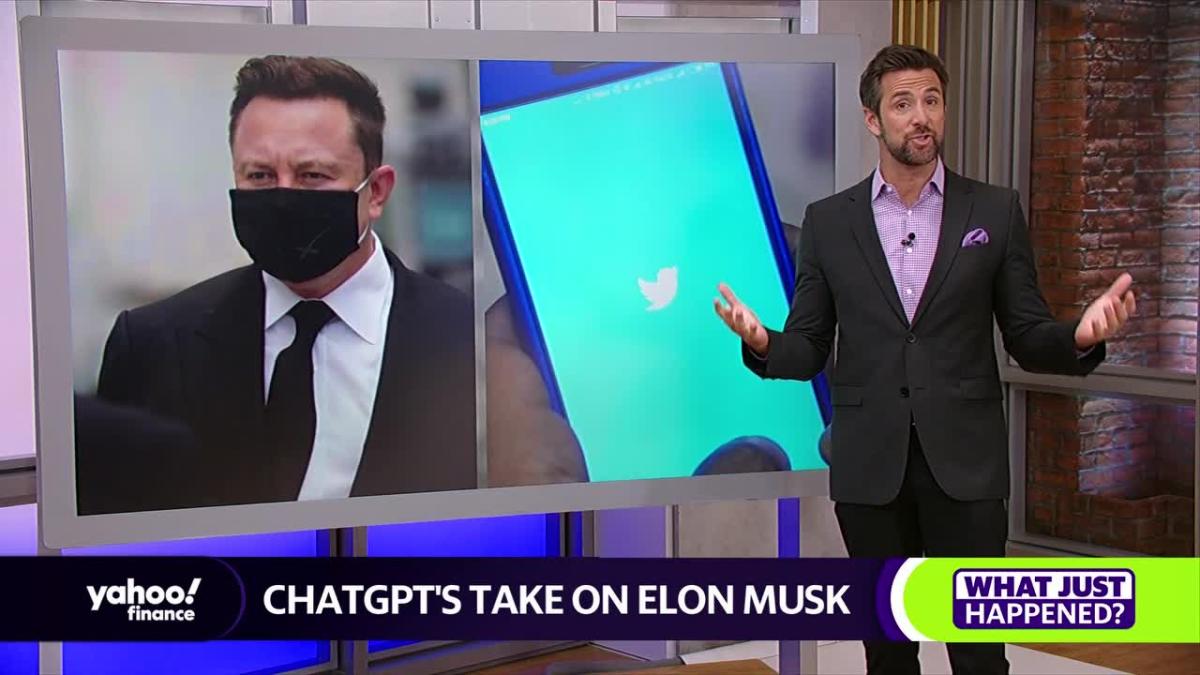 BRAD SMITH: Switching gears here, but kind of staying with SpaceX, SpaceX is just one of the many companies that Elon Musk is in charge of. Joining us now for a deeper look into his empire, we’ve got Yahoo Finance’s Dave Briggs live in living color in the studio. What’s going on, Dave?

DAVE BRIGGS: Good to see you, buddy. There’s a lot going on with Mr. Musk, to say the least. Distracted is probably the one word that characterizes it best. Far too many potentially life-altering projects for Elon Musk. So how best to define him? Well, perhaps through his favorite lens, which is the project consuming his time, his passion, and his energy in one 280-character tweet. To do so, I had to enlist today’s top tech, which is ChatGPT. Here’s what they came up with.

Quote, “Elon Musk is a South African-born American entrepreneur and business magnate known for founding companies such as Tesla Motors, SpaceX, Neuralink, and the Boring Company. He’s also known for his ambitious plans to colonize Mars, revolutionize transportation with the Hyperloop, and bring high-speed internet access to remote areas via satellite. He is often considered a visionary and a pioneer in the tech industry.” Well done by ChadGPT.

But ironically, they failed to mention, and many don’t know, Elon Musk is also a co-founder of ChatGPT creator, OpenAI. The world’s second richest man is, however, preoccupied with what Wedbush analyst Dan Ives calls one of the most overpaid tech acquisitions in history. That, of course, being his $44 billion Twitter buy. In less than 90 days, he’s gutted the place of employees and sent advertisers fleeing as well, all while watching the driver of his wealth shed 65% of its market cap in one year.

While Teslas themselves are still struggling to be fully autonomous, his other businesses are required to essentially drive themselves. SpaceX hasn’t quite colonized Mars, but it was valued at 137 billion bucks, a true rocket ship of future wealth creation.

On the opposite end of the Earth, though, Boring Company. They once promised to end traffic as we know it. Instead, its signature accomplishment is a $47 million tunnel that one human driver takes three passengers one mile from the Vegas Strip to the convention center. Neuralink, well, they promised to transform communication with human brain implants in six months. As the monkey could tell you, there’s only so much that can go on and fit in one human brain.

The wheel that drives Elon’s wealth is, of course, Tesla. And while Elon has unveiled the semi, teased the Cybertruck, and even marched out a humanoid robot, he’s still essentially stuck in neutral, which is two models, really, the Model Y and the Model 3, while Ford and GM continue to expand their product line in essentially every direction. With every new day, there’s a new Twitter proposal from Elon, the latest being auctioning off Twitter handles.

In case Elon wants a ghost account, Brad, he might consider registering @TheDistractedCEO. He wouldn’t have to pay for it because it is actually available right now. Distracted is the one word that characterizes his entire empire at this juncture.

RACHELLE AKUFFO: And, Dave, with that breakdown, it really does boggle the mind just how many things he has on his plate while he still has the time to tweet. But as you mentioned, there are some life-changing projects that he’s working on there. Big thank you there to Dave Briggs.