While past performance is no guarantee of future results, it’s not a bad place to start, and you could have done worse in the past decade than buying shares of Prologis (PLD -0.18%) or Agree Realty (ADC -0.41%).

For instance, you could have owned shares of the widely held Vanguard S&P 500 ETF. As the chart below shows, these real estate investment trusts (REITs) have handily outpaced the broad market benchmark since January 2013. 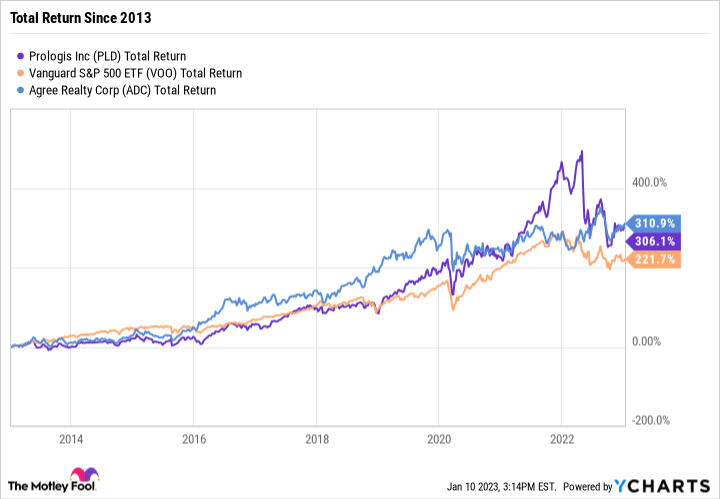 But what else about these two very different REITs — Prologis owns warehouses, while Agree specializes in retail properties — makes them two of the top real estate stocks to buy in January?

Prologis is positioned for global growth

San Francisco-based Prologis is considered the world’s largest owner of industrial real estate. The company says that in 2022, nearly 3% of all goods produced and sold on the planet went through a Prologis logistics property, including 36% of such products in the U.S.

Prologis has 1.2 billion square feet of warehouse space and operates in 19 countries. Of course, demand for that space is what matters, and Prologis says that a decline in development starts will combine with rebounding e-commerce volume to keep vacancy rates low and rents high and growing. (The company’s occupancy was 97.7%, according to its Q3 2022 report.)

Prologis is trading for about $120 a share, and the company’s forecast points to core funds from operations (FFO) finishing 2022 at $5.12 to $5.14 per share, a nice gain from the year before and good for a price-to-FFO-per-share ratio of about 23. That’s fairly high. The yield, meanwhile, is about 2.7%. Both of those measures point to the premium that the market puts on this stock.

Agree Realty heads into 2023 on a roll

While so many stocks have been rocked, Agree Realty has been on a roll and its shares have gained more than 8% in the past 12 months compared with a 17% decline for the S&P 500. The Detroit-based company owns of about 1,700 net-leased retail buildings and ground leases in all 48 continental states.

With only 36 million square feet, Agree Realty’s portfolio is but a fraction the size of Prologis’s. However, this retail REIT looms large as a market outperformer, posting a total return since its 1994 initial public offering that is more than double that of the benchmark Vanguard Real Estate ETF.

Agree’s yield, meanwhile, is almost 4%, and that’s at a share price that’s not beaten down. It’s also a bit cheaper than Prologis, selling for a price-to-FFO ratio of about 17.6. There are a lot of REITs that are trading for a lot less than that, but not many that have this company’s track record and bright prospects.

To be sure, Prologis stock took a hit last year falling roughly 25% after FedEx and Amazon — two major Prologis tenants — said they had excess warehouse capacity. E-commerce is this company’s bread and butter, and if lots of consumers switch to in-store shopping or a serious recession hits that could certainly hurt both B2B and B2C shippers. That effect could be even more immediate for Agree Realty, whose tenants are retailers on the front line of a recession’s impact.

But both of these REITs have the track record, the diverse and deep bench of solid lessees, the balance sheets, and the experience to weather this storm and keep pumping out passive income and share price growth for years to come. That makes them two top stocks of any kind — not just real estate! — to consider now for a relatively conservative, income-focused investment.